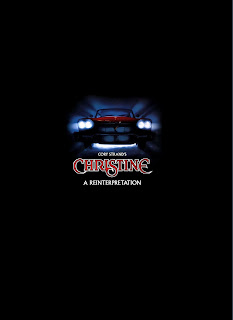 More soundtrack reconstruction, this time focused on John Carpenter's woefully under appreciated film "Christine."  I would say the soundtrack has received less than its due as well in the wake of more iconic Carpenter scores; with this reimagining of source material I have attempted to pay tribute to some of Carpenter's most staunchly minimalist (and entirely effective) scoring by allowing the suffocating ambiences to float and expand.  The droneworks here are massive and given free reign to unfold, hopefully ensconcing the listener in the overwhelming feeling of dread, unreality,  and horror Carpenter so masterfully conveys throughout the film.  On the wall pieces I have attempted to employ a circular method of composition that reflects the car's constant cycle of damage and repair, reiterating the film's theme that love, true love, is ultimately unstoppable.
Altar Of Waste is pleased to release this latest installment of soundtrack revisionism in a DVD case designed and constructed by me, in a very limited edition of 5 hand-numbered copies.  $20 ppd. in the United States, $28 rest of world.

ORDER HERE: www.altarofwasterecords.storenvy.com
Posted by Author at 9:59 AM