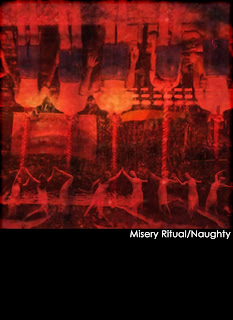 Excellent split between California's Misery Ritual and France's Naughty, with each project turning in a 20 minute track.  Misery Ritual's piece is a storm of crackle and detritus, displaced thundering rumbles and crumbling distortion sculpted into an anxious and jittery wall; it's a distinct and interesting sound a bit removed from the bleak and unsettling ANW-style constructions the project has previously released, but no less intense or frightening.
Naughty's piece is a beautifully deep and dense rumbling wall, pure in its hypnotic and entrancing void power, and keeping in line with the masterful constructions she's released previously.  It will pull you completely under and nullify you with its thick and enveloping tones.
Together the two pieces form an entrancing, sometimes violent, sometimes mesmerizing descent into the void of the wall.
Packaged in a DVD case, with a small insert, in a limited edition of 20 hand-numbered copies.  $10 ppd. in the United States, $26 rest of world.