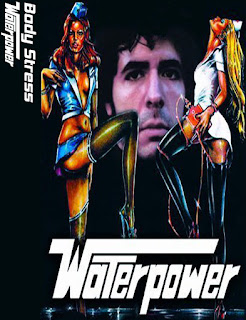 Very pleased to unleash the first in a series of four cassettes from Body Stress, all based on classic exploitation films from the 1970s/80s.  "Waterpower" works off of the classic film starring Jamie Gillis, based on the infamous real life case of Michael Kenyon, the "Illinois Enema Bandit."
The three tracks here are some extremely loud, caustic, and psychedelic harsh noise, also utilizing samples and sounds from the film.  Really masterfully composed, a beautiful and intense assault of sound.
The remaining three cassettes will be released throughout the year.
Released in a limited edition of 20 hand-numbered copies.  $8 ppd. in the United States, $24 rest or world.

ORDER HERE: www.altarofwasterecords.storenvy.com
Posted by Author at 7:43 AM