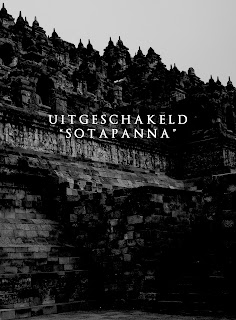 Uitgeschakeld returns to AOW with a crushing, deeply meditative collection of four massive 80 minute HNW compositions concerned with Eastern philosophy and tradition.  The pieces here will satisfy anyone familiar with the project's previous releases, as well as anyone looking for truly suffocating wall compositions, but here Uitgeschakeld also delves deeper into the relationship between nihilism and the nothingness of Buddhism, the place where nothing means anything and no longer has to, a place removed from meaning and open to possibility.  Open to beyond, past suffering.
On a personal note, this record has been tremendous help to me during a difficult personal time.  The depth and meditativeness of it, the calm in the midst of a storm...the ideas this record is getting at, the beauty they're hinting at...it's difficult to achieve, at times seeming out of reach.  The pieces here have helped to drain me at times, to forget anxiety and hurt, and to simply focus on what is.  I hope that this record could do that for others.  Casper is one of the few people working in HNW that i think really understands what nihilism means and is, and his work as Uitgeschakeld has simply become the standard by which I will measure all other "nihilistic" projects.
Packaged as four separate albums, each with their own artwork, but united by a design and conceptual aesthetic.  Released in a limited edition of 10 hand-numbered copies.  $35 ppd. in the United States, $51 rest of world.

ORDER HERE: www.altarofwasterecords.storenvy.com
Posted by Author at 12:47 PM No comments: 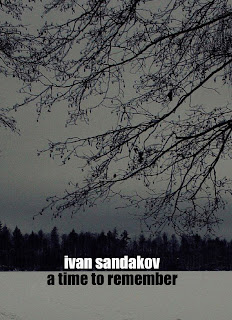 Restless and hyper-creative HNW wizard Ivan Sandokov (of Sleep Column and so many more fine projects) shifts gears and turns in a lengthy suite of absolutely, astonishingly and breath-takingly lovely ambient composititons.  The three pieces here are deep and beautifully constructed meditations on loss and hurt, the pain of memories drifting into oblivion along with the meaning of one's life.  I have found these pieces to be very moving and incredibly emotional; this record gives me goosebumps.  Definitely in the Basinski/Dunn/Drumm vein, with some Tim Hecker and Troum thrown in for good measure.  I do not make those comparisons lightly.  This release is gorgeous; certain to be in my top 10 noise/drone releases for the year.
Packaged in a DVD case, with minimal artwork done by the artist himself.  Released in a limited edition of 10 hand-numbered copies.  $10 ppd. in the United States, $26 rest of world.

ORDER HERE: www.altarofwasterecords.storenvy.com
Posted by Author at 12:47 PM No comments: 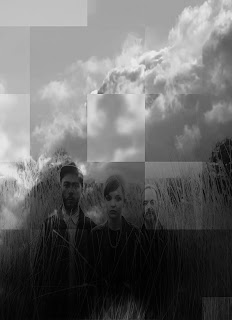 Flood & Flame is a new collaborative project between Texas HNW iconoclasts Mitchell Rotunno (The Ebony Tower) and Christopher Charles Robinson (Big Hole) focused on the work of synth pop overlords CHVRCHES.  I'm very familiar with the output of both of these gentlemen, as they are friends to me and have both had multiple releases with AOW; the sounds here are utterly transfixing, noise taken to a place of deep melodicism without sacrificing intensity of any sort (musical or emotional.)  It's a thing of rare magick, these six discs, and i'm really at a loss to describe it further.  It's pop music taken to its logical, deconstructionist end, stretched out to infinity and imbued with noise's causticness and inaccessibility.  Pushing you away while at the same time beckoning you closer.  Tension and beauty, explosions and descents into sadness.  Over 8 hours of lovely sounds.  I wish i had made this record, it's just masterful.  If you are a fan of either Mitchell's or Christopher's projects, you need to hear this.
Packaged in a six-DVD case and released in a limited edition of 15 hand-numbered copies.  $30 ppd. in the United States, $46 rest of world.

ORDER HERE: www.altarofwasterecords.storenvy.com
Posted by Author at 11:36 AM No comments: 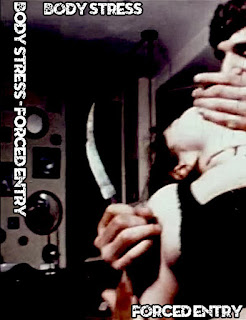 Second cassette in the four-cassette series from Body Stress, this time inspired by the classic exploitation film Forced Entry.  The sound here is even more chaotic than on the first cassette, with Body Stress creating a dense tapestry of harsh noise, rough and raw ambient sounds, samples from the film, and all manner of destructive textures.  It's pretty fucking nightmarish!  Scathing feedback worship and absolute junk noise horror.
Released in a limited edition of 20 hand-numbered copies.  $8 ppd. in the United States, $24 rest of world.

ORDER HERE: www.altarofwasterecords.storenvy.com
Posted by Author at 10:57 AM No comments: 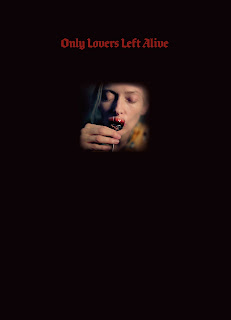 At long last, the deluxe and expanded edition of my rework of the score for one of my very favorite films, Jim Jarmsuch's ode to existential ennui, Only Lovers Left Alive.  I always intended to do a "deluxe" version of this release but had to wait for the blu-ray to become available.
The expanded edition includes six new ambient compositions created from elements of the score, never before heard or released.  It also includes a "Totality" noise recording of the film's entire audio track on DVD-R.
This released is packaged in my usual "deluxe" style, with each composition given its own disc and packaging, utilizing my favorite images from the film (again, very difficult to choose just 42, as they're all gorgeous.)  All of the screengrabs were done by me personally from a blu-ray version of the film.

"There was no film I was more excited for over the last two years than Jim Jarmusch's vampires-existing-in-tedium masterpiece "Only Lovers Left Alive."  While the film was certainly as brilliant as expected, showcasing all of Jarmusch's strengths as a director, the soundtrack was equally as mind-blowing and gorgeous.  Written and performed by Jamrusch's band SQURL and with help from his frequent collaborator (and amazing artist in his own right), lute revivalist/reinventor Jozef Van Wissem, the soundtrack is a mesmerizing mix of gorgeously aching and yearning melodies and strained feedback tied to hypnotic and insistent standard rock forms.  The result is an epic musical construction that both comments on the themes of the film and exists apart from it.
Sometimes when I do these reworks I end up being astounded at the results, and this is one of those times.  The pieces here are some of the loveliest i've crafted, evoking a wealth of despondent, sorrowful moods and feelings that perfectly complement Jarmusch's study of tedium, banality, disappointment, exhaustion, and sadness.  An epic drone/ambient journey into interiority and wistful nostalgiah, perhaps for something that never really was.  It all seems so different, but it all seems the the same."

ORDER HERE: www.altarofwasterecords.storenvy.com
Posted by Author at 10:54 AM No comments: 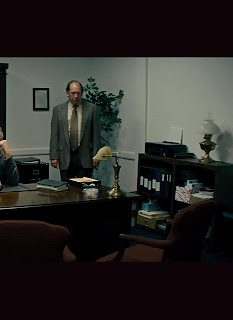 Deluxe edition of my rework of David Wingo's score for Jeff Nichols' Midnight Special.  This expanded edition is presented in my usual "deluxe" style, with each composition given its own disc, complete with its own artwork and packaging utilizing my favorite shots from the film (there are many; it was hard to select 42!).  The screengrabs were all done by me personally from a blu-ray of the film.  The set also includes a "Totality" noise rework of the film's audio track on DVD-R.

"My deep ambient rework of David Wingo's ethereal, haunting score for Jeff Nichols' aching science fiction masterpiece Midnight Special.  Filled with stunning visuals, understated performances, and a superbly confident personal vision, Nichols' film resonates with an intensity and hurt that few films can summon up.  It is deeply emotional, a sort of cross between Steven Spielberg's E.T. and Stephen King's Firestarter.
Working with David Wingo scores is always difficult as he tends toward shorter pieces; though brief, they are always moving and elegiac (he is easily one of the best composers working in film at the moment.)  My work here offers up 20 ambient pieces varying in length, from short (4 minutes or so) to longer (45 minutes), depending on what the individual piece dictated to me.  I try to go off my own emotions as much as possible when i do these reworks; the result is a sad and forlorn collection of dense, murky drone."

ORDER HERE: www.altarofwasterecords.storenvy.com
Posted by Author at 10:46 AM No comments: 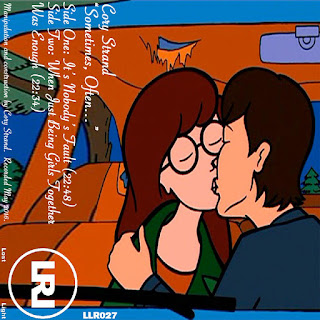 I have a new solo cassette out on the fantastic label Lost Light Records.  This is some of my harshest, most extreme material in quite some time, a bit of a throwback to my old "psychedelic wall noise washout" sort of sound.  It's very difficult to listen to, and the two pieces are noise works i'm deeply proud of.  To a certain degree, yes, this tape is about a particularly heart-crushing episode of Daria - but like much of my work recently, it is more about the relationships between people, the hurt and damage we are able to cause one another, and the generally pessimistic view of life this fact engenders in us (me especially.)  Limited to 15 copies, already down to 5 remaining.  If you are interested in this cassette, don't sleep on it.  I am not sure if i will have any copies for sale through AOW (i don't think so.)  Please order from Lost Light and support another fantastic noise label; pick up as many of their other releases as you can, they're all pretty fucking magnificent.
You can stream/purchase "Sometimes, Often" here:

https://lostlightnoise.bandcamp.com/album/sometimes-often
Posted by Author at 9:00 AM No comments: 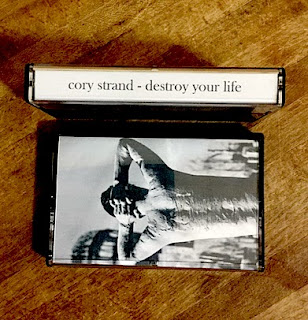 I have a new solo cassette available on the fantastic label Endless Landscapes Of Decay.  Entitled "Destroy Your Life," this is a deeply personal composition from me, and a piece of music that i am very proud of.  Manipulated drone material, synthesizer ambience, guitars, and samples.   Bleak and sad.  My original 15 minute piece is on the A-side, with an extremely melancholic, gorgeous remix of my material by E.L.D. on the B-side (the remix is astounding; it gives me goosebumps).  I will not have any copies of this available through AOW, so please, if you are interested in my work, stop by E.L.D.'s bandcamp and pick it up.  The tape is limited to 13 copies.  While you are there, you should probably just buy everything else the label has put out, because it's all incredible.  Really one of the best labels out there right now; thanks so much to Ben Hudgins for releasing this.  It means a great deal to me.
Listen/purchase through here: 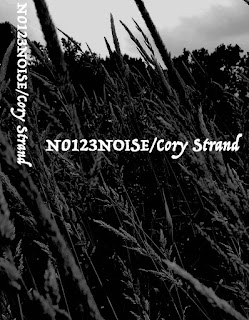 Haunting, deeply melancholic split between N0123NOISE and myself, a descent into ambient drone sadness and despair.  This is probably one of the most beautiful and sorrowful recordings i've been a part of; the tiredness and resignation and the aura of despair that haunts these two pieces is beyond intense.  N0123NOISE's composition is almost orchestral in its funereality, a ghostly approximation of the banality of existence and the emptiness that remains when everything else has been taken from you.  My piece is an extended synthesizer drone, a hyper-mournful meditation on the mess my life has become over these last several months.
Pure fucking sadness.
Released in a limited edition of 10 hand-numbered copies.  $8 ppd. in the United States, $24 rest of world.

ORDER HERE: www.altarofwasterecords.storenvy.com
Posted by Author at 9:04 AM No comments: