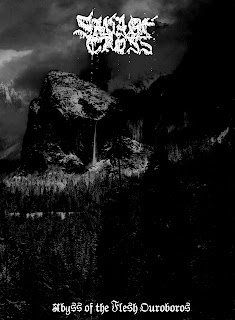 The true black is the void, the embrace of the crawling emptiness, the recognition of the infinite oblivion, and the acquiessence to the malleable obliqueness that scalds our existence.  Much of modern black metal cloaks itself in the robes of ideological severity only to come up far short in terms of approaching the philosophical cornerstones of the genre; even the most supposedly nihilistic projects fail to follow up on their own endorsements of immolation and violence.
Savage Cross make no such pronouncements of intent.  Instead we receive deliverance unto the waste, an open-eyed gaze into the swirling waters of the universal negative.  Nothing comes back here; this is the devourer.  Enter and find the end.  Through the approximation of black metal form and the creation of sickeningly thick walls of molten contempt, Savage Cross attain the cosmically transcendent through violent harness, caring little for concepts of the future or awakening.  This is pure eradication of consciousness.
Altar Of Waste is extremely psyched to bring forth this numbing call to obliteration, Savage Cross's first physical offering after a small wealth of digital releases.  Behold the spoils of psychic despondency.   Packaged in a DVD case with artwork by Evan Craig and Cory Strand, in a limited edition of 20 hand-numbered copies.  $10 ppd. in the United States, $18 rest of world.
More Savage Cross can be perused here: http://algeadestruction.bandcamp.com/