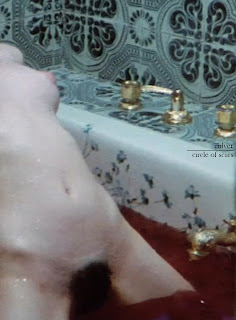 The decaying dream erodes away in the pustulent recesses of consciousness, the oozing black tar of the mind that manifests as explosions of violence, vampiric fantasy, and schizophrenic deviation.  The eternal nothingness of the night, the glimmer of the stars above as they move ever further and further from our orbit, the alignments of ancient instructions hidden in the cosmos as they drift and float through the black ether, gaping maws of blinding horror and base intelligence, forever hungry and indifferent.  Pillars that once rose to the heavens stand crumbled and broken, temples once alive with human voices and rituals lies rotting and empty, hollowed out of the warmth they once possessed.  The landscape is blighted by a pervasive bleakness, a great wash of grey that becomes a flow of dripping black blood, drowning all in its ever-expansive path.  This world is haunted and dead.
Altar Of Waste is beyond psyched to present this massive set from Culver, one of the finest crafters of minimalist terror drone and death stasis currently working in the genre.  Lee Stokoe's vision is one of complete and numbing exploitative horror, a map of nightmares made real and the graveyard of dreams.  Packaged in a DVD case in limited edition of 20 hand-numbered copies.  $18 ppd. in the United States, $26 rest of world.