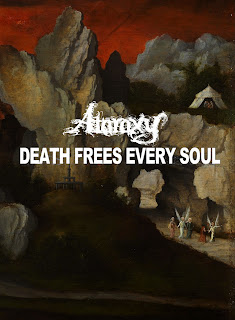 A massive split/collaborative release from Ataraxy and Death Frees Every Soul imagining the Biblical warning of Sodom and Gomorrah through sonic devastation, a desolate crawl through incredibly weighty bass textures and severely static forms of wall-making that bring to mind both the moral decadence and the lustful gratification that brought a city to flame.  The sounds here are appropriately apocalyptic and monstrous, easily suggesting the raging vengeance thrown down by a God affronted by the wanton lasciviousness of His wretched creations.
Each project offers up a solo track and then unites for a brutally kaleidoscopic collaboration that feels like it's living in the very heart of the conflagration that tore a city to the ground.  God's unwavering eye sees all beneath His domain.  Running only prolongs the suffering.  Submit, and repent.  For eternity.
Packaged in a DVD case in a limited edition of 30 hand-numbered copies.  $10 ppd. in the United States, $22 rest of world.