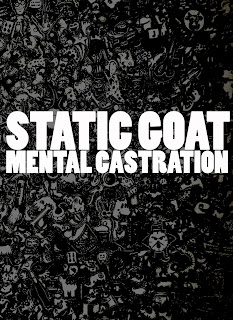 A physical release of the compilation album originally released by Dipsomaniac Records, Static Goat's "Mental Castration" is a wasted electric head trip of the mightiest order, a tour through the obsessive psyche that disturbs and disorients as much as it truly and utterly basks in the hopelessness of improvement as a concept for continued existence.  This is a massively psychedelic and ripping auditory experience that will eviscerate you through a maddening employment of textures and hypertextures shattering off of one another, creating a total maelstrom of anxiety and dysfunction.  Wading far into the outer spaces of the HNW pool, "Mental Castration" gleefully chokes on its own vomit and licks the remnants up from the waves.  It's total neon laser damage in the most exuberant and aggressive way possible with a seriously expansive palette of sounds anchoring it to a scorched earth.  This is an intense fucking mind spiral and it will take you deeeeeeeeeeeep.
Altar Of Waste is pleased to delve into this portrait of recessed consciousness.  Packaged in a DVD case in a limited edition of 15 hand-numbered copies.  $15 ppd. in the United States, $27 rest of world.