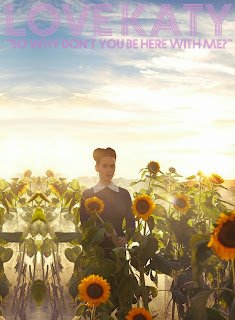 Massive new album from Love Katy in honor of the release of Miss Perry's newest album, "Prism."  This one is truly huge, the longest LK album to date, clocking in at just over 77 minutes, not a one of which is even remotely wasted.  I am hesitant to use words like "definitive" when writing about HNW but "So Why Don't You Be Here With Me?" embodies everything I love about this particular project, and across the album's expanse, James Killick taps into a wealth of emotions and moods to deliver an epic piece that blooms over with yearning, anxiety, regret, and ultimately, affirmation and a belief in joy and human connection.  It's an incredibly dynamic composition that progresses through distinct movements, becoming something like a fused together symphony of Katy Perry and the crumbling, warm, thick walls that the project is known for.  It's a masterful exploration of emotion and an amazing expression of hope, that rare work of crushing, destructive beauty that reaffirms just what HNW as a genre is capable of.
Altar Of Waste is overjoyed to release this album, one which I truly hope will be viewed as a high mark in the annals of HNW.  As Miss Perry herself sings, "A future is right now/I'm in front of you."
Packaged in a DVD case in a limited edition of 20 hand-numbered copies.  $10 ppd. in the United States, $22 rest of world.

ORDER HERE: www.altarofwasterecords.storenvy.com
Posted by Author at 6:19 AM