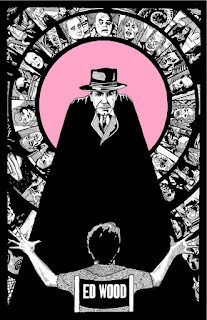 My rework of Howard Shore's glorious, beautifully quirky but mostly despondent score to Tim Burton's finest film, the chiarascuro drenched masterpiece Ed Wood.  Burton's homage to the delusional but visionary Ed Wood features stunning cinematography, one of Johnny Depp's finest performances, and an array of awesome actors portraying the various eccentrics that weave themselves around Wood's mess of a life.  It's simply a brilliant film that memorializes both the 1950s horror/sci-fi that Burton so obviously loves, as well as eulogizes a Hollywood that used to be, where an ambitious wide-eyed maverick like Wood could still get films made.  Perhaps Ed Wood is a fitting cinematic funeral for the Dream Factory, and a warning of the creative desert Hollywood would become in just a few decades.
My rework of the score goes all in for the sadness that permeates the film, a set of long, deep, mournful drones full of existential yearning and anxiety-ridden dissatisfaction.  Thick, unctuous tones envelop and eventually suffocate, creating an atmosphere at once comforting and terrifying.
Packaged in 14 separate DVD cases, each with their own artwork utilizing scenes from and ephemera associated with the film.  Twelve CDs of the rework proper, a short "Coda" piece, and an HNW "Totality" recording of the film's entire audio track make up the work.  Nearly 18 hours.  Released in a limited edition of 5 hand-numbered copies.  $130 ppd. in the United States, $143 rest of world.

ORDER HERE: www.altarofwasterecords.storenvy.com
Posted by Author at 4:33 AM