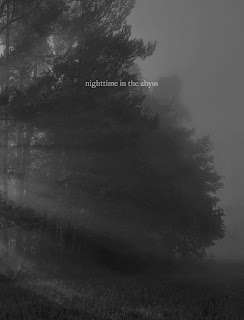 I am very pleased to announce the eighth installment of the "Twelve Suicides" series, from longtime AOW ally Nighttime In The Abyss.  This recording marks the project's return after a considerable length of silence: all of the hallmarks of NITA are present here (persistent eerieness, suffocating atmosphere, visceral emotionalism), but the sound is clearer, more haunting, fuller, more gargantuan than it has been on any other NITA piece.  Across thirty harrowing minutes, Christopher Ropes explores matters of death and the immateriality of flesh, the persistence of being, and ideas of the beyond.  Tinged with eastern philosophy and the vision of a poet, this album casts echoes and queries into the aether.  It's a thing of beauty - tortured, wrecked beauty - and I could not be more happy to be releasing it.  Includes a remix prepared in alliance with Invoke Aether Often that stretches the piece to its melodic and ambient limits.  I would also like to add that Christopher recently had his first book of poetry published through Dynatox Ministries; if you enjoy his work as NITA and his intense lyrical content, you'll enjoy his poetry as well.  Interested parties can check it out here:

This release is packaged as a fold-over cover, housed in a clear plastic bag (the same as the previous volumes in the series.)  Released in a limited edition of 15 hand-numbered copies.  $7 ppd. in the United States, $20 rest of world.

ORDER HERE: www.altarofwasterecords.storenvy.com
Posted by Author at 9:07 AM