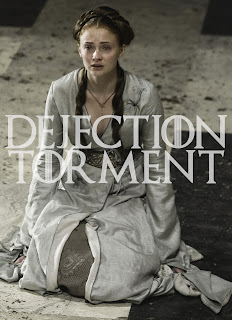 This Dejection recording is part of an ongoing series of releases from the project based on HBO's Game Of Thrones (three more tapes in this series will soon be released by Mitchell Rotunno's Knife With A Smile label.)  This particular album works off of Joffrey's torment of Sansa throughout season two of the series, and showcases Dejection's synthesizer compositions.  The four pieces here are all deep, John Carpenter-inspired excursions into bass tones, cinematic atmospheres, and sorrowful explorations of degradation.
Packaged in a DVD case and released in a limited edition of 5 hand-numbered copies.  $10 ppd. in the United States, $23 rest of world.

ORDER HERE: www.altarofwasterecords.storenvy.com
Posted by Author at 7:32 AM