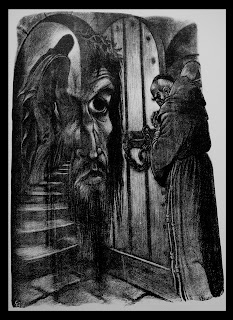 A massive new release from The Ebony Tower, working off of Fyodor Dostoevsky's equally massive philosophical tragedy The Brothers Karamazov.  As always with The Ebony Tower, the HNW material here is meticulously crafted and masterfully executed, a perfectly bleak accompaniment to Dostoevsky's epic tale of personal destruction, rot, and redemption.  Twelve gargantuan slices of tonally varied HNW, ranging in mood from rage to sorrow to purgatorical despair.
Presented in two editions:
1) The regular edition, with all twelve CDs housed in an oversize DVD case.  Released in an edition of 10 hand-numbered copies.  $45 ppd. in the United States, $58 rest of world.

2) The deluxe edition, with each CD housed in its own DVD case, each with their own artwork sourced from a 1949 edition of the novel published by the Limited Editions Club and housed in the University of Minnesota's rare book archive, utilizing Fritz Eichenberg's stunning woodcut illustrations (personally photographed by me.)  Released in an edition of 5 hand-numbered copies, only 2 of which are available through Altar Of Waste (the rest will be available through The Ebony Tower.)  $120 ppd. in the United States, $133 rest of world.

This release is a stunner, and the deluxe edition is probably one of the loveliest releases on the label to date.

ORDER HERE: www.altarofwasterecords.storenvy.com
Posted by Author at 4:50 AM