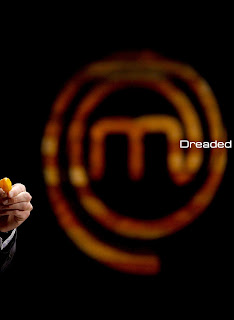 AOW debut for this relatively new HNW/ANW project.  Dreaded crafts dense HNW and eerie ANW dedicated to the US television show Masterchef.  I'm a big fan of all sorts of cooking shows, Masterchef included (though the UK version is miles better than the US version), so when this project got in touch with me about releasing a series of albums (there are 13, all in all) based on the show, I decided to go for it.  Anyone who has followed AOW since its inception will know that the label makes no distinctions about what HNW should and shouldn't be; I much prefer AOW to enable the thematic obsessions of its artists sans any sort of censure or definition.  For those who may doubt, these 13 albums (to be released sporadically over 2016) are indeed some severe and depressing forays into soundcraft; I would have released the entire series as a huge (and expensive) set, but we figured it might be better to release each record individually, so as to let people explore the work and form their own opinions.
"I" is a strange bit of HNW/ANW hybridization, crafting a soundworld not unlike some of the more minimal static obsessed projects that have been appearing lately.  Eerie, unsettling stuff.
Packaged in a DVD case in a limited edition of 5 hand-numbered copies.  $10 ppd. in the United States, $26 rest of world.

ORDER HERE: www.altarofwasterecords.storenvy.com
Posted by Author at 9:37 AM