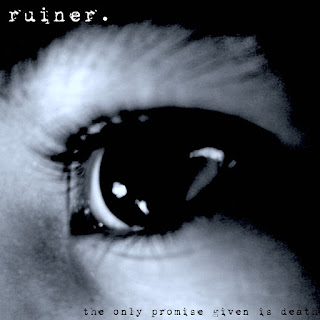 As a sort of lead-up to the upcoming new Ruiner. recording on AOW, i've been granted license to physically issue the monumental album "The Only Promise Given Is Death," originally released digitally through Big Pharma records.  Ruiner. trafficks in an intensely bleak, deep, and despondent style of HNW/ANW/drone; i'd call this record "crushing" but it's so far beyond that that the word seems horribly inept.  This is just pure sorrow and hopelessness translated into sound-perfect music to drag a razor blade across your wrists to.  Pretty much the sound of your life decaying and becoming the nothing that it truly is.  To say i'm psyched about this project is an understatement; it's some of the best stuff i've heard in years.
Packaged in a heavy fold-over cover in a clear plastic bag, with the two discs housed in black sleeves.  Released in a limited edition of 15 hand-numbered copies.  $12 ppd. in the Untied States, $28 rest of world.

The record can be streamed in its entirety here:

And it can be ordered through Altar Of Waste here: