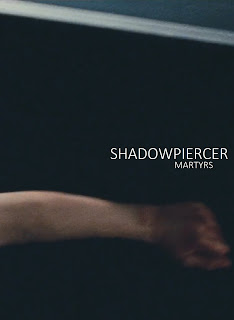 First AOW release in what will hopefully be a series of recordings from Dakota Snaketail, this time from his excellent Shadowpiercer project.  Finding Dakota's work was pretty revelatory for me in that we seem to be working in the same sort of space with noise (film/pop culture/philosophy); all of his releases are quite beautiful, and I knew right away that I wanted to work with him on some albums.
"Martyrs" is a massive set of highly progressive, intense HNW/ANW/drone/noise/synth compositions based on the classic horror film Martyrs, an incredibly diverse work that abounds in multiple sounds and textures.  There's so much going on here that I can't properly describe it, but i've been listening to this record pretty much since Dakota sent it to me, and everytime i hear new stuff.  "Life in the Orphanage" is one of the best HNW tracks i've heard in quite awhile.  As of now this release is probably going to end up in my top records for 2016, right up there with She Walks Crooked's "A Drift Upon the Night."  This is masterful stuff, and i'm honored to be releasing it through Altar Of Waste.
Packaged in a DVD case with artwork by Dakota.  Released in a limited edition of 10 hand-numbered copies.  $25 ppd. in the United States, $41 rest of world.

You can check out Dakota's amazing work here:

http://shakhburz.bandcamp.com/
Posted by Author at 6:01 AM