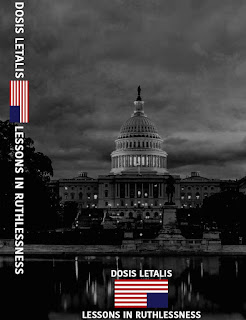 Long-awaited release of this crushing double cassette set from Dosis Letalis, the project's second AOW release based on Netflix's labyrinthine political thriller House Of Cards.  The four walls here are easily some of the heaviest work i've heard from Nemanja, reflecting the brutally dark and cutthroat atmosphere of its inspiration.  Fans of DL's politically-charged offerings will not be disappointed by this set, as the material here simply destroys.  Massive, brooding walls of thick unctuous distortion, brimming over with the project's now-trademark crackling tones.  Treble and bass united in unholy, destructive power, an elegy for a fictional representation of tyranny that seems more and more realistic with each passing day in the United States.  The layout is quite lovely, as well.
Packaged as a double cassette set, with each cassette having unique artwork.  Released in a limited edition of 10 hand-numbered copies.  $20 ppd. in the United States, $35 rest of world.

ORDER HERE: www.altarofwasterecords.storenvy.com
Posted by Author at 11:50 AM