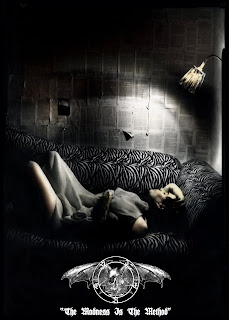 Very pleased to be releasing this massive box set of recordings from Chier, who has become one of my very favorite HNW artists currently in the scene.  This box set is inspired by, and a tribute to, the ethereal, eerie works of photographer Lauren Simonetti, who crafted truly unsettling work without the use of digital manipulations or retouchings (all of her effects were done in-camera.)  This method of working mirrors Chier's approach to HNW: no digital manipulations, no post-editing.  The artist behind Chier builds many of his own pedals and synths, giving the project's recordings a sound like no other.  For me, Chier's HNW is what HNW is supposed to sound like: it is dirty, lofi, sepulchral, distant, muffled, huge, majestic, and engulfing.  I am very honored to be releasing this work; it is simply an amazing set of varied and haunting HNW compositions.
Packaged as a 5-disc set, with each disc housed in an individual DVD case with its own unique artwork utilizing the photos of Simonetti.  The five discs are packaged in a cardboard box with a paste-on cover; each set includes a numbered insert.  Released in a limited edition of 10 hand-numbered copies.  $40 ppd. in the United States, $56 rest of world.