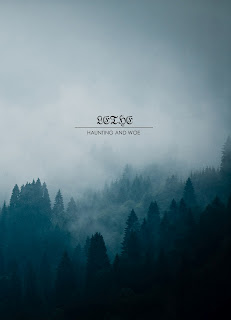 Composed and recorded at the same time as "Inconsequence," "Haunting and Woe" is a moodier and hazier evocation of Lethe's worldview, one in which the banalities and frustrations of life rise to the fore and threaten to overtake the very notion of existence.  "Haunting and Woe" seems to hang on to notions of defeat and failure in a questioning manner, constantly reflecting on choices that have already been made, an infinite process of cyclical thinking that ultimately leads to despair, regret, and removal.  There is no joy here, only the solace of purgatorical emptiness.
If "Inconsequence" dealt with the void, then "Haunting and Woe" narrows Lethe's focus to a growing sort of melancholia, an infection in life that gnaws and teethes but never fully bites.  This is the sound of enervation, of confidence receding, of desire ebbing away in a wash of self-criticism and loathing.  This is a catalogue of perceived mistakes, a gathering of storm clouds across the sky of your being.  Isolationism is imminent.
Altar Of Waste unleashes this behemoth set of recordings after much delay, packaged in a DVD case in a limited edition of 5 hand-numbered copies.  $20 ppd. in the United States, $28 rest of world.