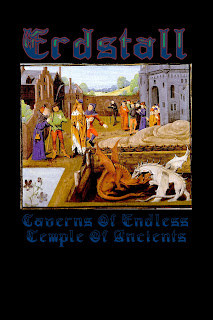 Cavernous, engulfing medieval synth drone from this mysterious underground entity.  Working in the small drone subgenre of dungeon synth, Erdstall's two albums "Caverns Of Endless" and "Temple Of Ancients" take the distinctly dark ages feel of the genre touchstones and transform them into something far more sinister and unnerving, a thick and choking soup of ancient mists and gloaming, a pallid and rotten moon on the face of a sky from eras long since lost to history.  The epic and orchestral feel that insinuates itself into a lot of dungeon synth work is here as well, but it's buried beneath globs of tarry black drone and a palpable sense of defeat and insignificance.  Not all quests end in riches and acclaim with granted titles and lands-some end in painful, violent, and bloody death, in deep and echoing stains of misery that blight generations and tarnish legends.  We have always been at the mercy of the world, crushed underfoot by processes unknown to us, mostly hidden from the darker mysteries and forgotten entities that reside in the lost spaces of the earth.  On these two records, Erdstall unveils portents and harbingers, a descent into outer realms of perceived glory and the stagnancy of human fallibility.
Altar Of Waste is very pleased to issue these albums in their first physical forms.  Previously available via the internet, these two pieces now become a more tangible document.
Packaged in a twin volume DVD case with an OBI strip, in a limited edition of 20 hand-numbered copies.   $20 ppd. in the United States, $32 rest of world.

ORDER HERE: www.altarofwasterecords.storenvy.com
Posted by Author at 6:55 AM