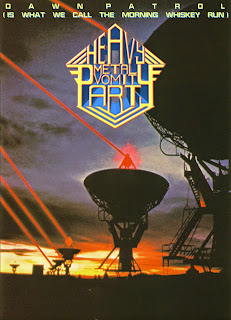 Second AOW outing for the mighty Heavy Metal Vomit Party, this time using Night Ranger's "Dawn Patrol" tape as source material.  Joe the Stache completely obliterates the tape here, destroying it utterly and transforming the tracks into some cripplingly severe audio devastation.  This is some seriously mid-tone/trebly, awesomely loud tape waste-one of the more brutal listens I've had in awhile, a scorching holocaust of cassette-slaying horror and heavy metal excess.  No numbing HNW stagnancy here-it's all an assault.  As usual with HMVP, the titles are hilarious, but the music is deathly serious.  You will not emerge unscathed by HMVP's caustic attack.  Don't tell me you love me-just cut up a few lines of cocaine, grab a few bottles of whiskey, and herd a few groupies onto the bus.  It's going to be a long night (ranger.)
Packaged in a DVD case, with a small insert, in a limited edition of 15 unnumbered copies.  $10 ppd. in the United States, $23 rest of world.