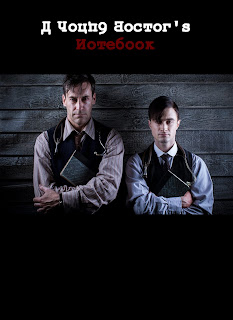 A collection of HNW "Totality" reworks for each episode of the first two seasons of "A Young Doctor's Notebook," one of my favorite new television shows from the BBC.  Extremely morbid humor combined with intense gore effects and morphine addiction gives "A Young Doctor's Notebook" an almost unbearable weight of absurdist dread and terror; think Steven Soderbergh's "The Knick" without such deathly seriousness and you're almost there.  "A Young Doctor's Notebook" succeeds largely in part to the casting; both Jon Hamm and Daniel Radcliffe have no issue severing ties to their respective images (Hamm as Don Draper and Radcliffe as Harry Potter) and are willing to go as far as they need to for their roles here.  They make a fine comedic pairing, floundering as they drown in existential despair.
This rework utilizes the full audio tracks of each of the eight available episodes (like my "True Detective: Season One" set from last year) and transforms them into short (each piece is between 20 - 24 minutes) bursts of dense, psychedelic harsh noise, hopefully evoking the torturous winter weather of the bleak Russian countryside the series calls home.  Packaged as 8 separate albums, with near-uniform layouts and a very minimalist design.  Released in a limited edition of 5 hand-numbered copies.  $50 ppd. in the United States, $63 rest of world.

ORDER HERE: www.altarofwasterecords.storenvy.com
Posted by Author at 3:58 AM