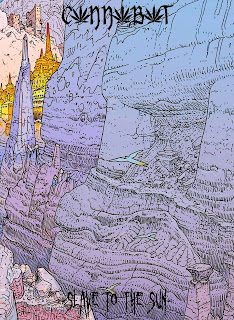 Debut physical release for this HNW project, having previously issued a record ("Witch Head") through James Shearman's HNW Netlabel.  "Slave to the Sun" picks up where that recording left off, offering up three deep, dense slabs of monolithic, tar-drenched, fuzzed-out, buzzing HNW.  This is seep-into-your-brain and numb it type noise, meditative in its droning power.  Some of the tracks here drift off into serious narcoleptic ANW-territories, giving the record an intensely psychedelic tone and texture.  Definitely one to zone out to.  I'll be doing a split with this project soon!
Packaged in a DVD case with awesome psychedelic sci-fi artwork.  Released in a limited edition of 15 hand-numbered copies.  $10 ppd. in the United States, $26 rest of world.

https://harshnoisewall.bandcamp.com/album/witch-head
Posted by Author at 6:01 AM