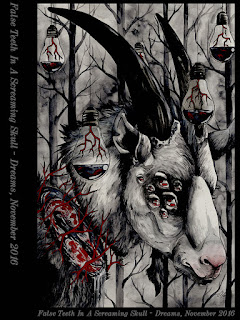 Debut release from this new project, a totally bizarre and somewhat disturbing foray into noise improvisation, dream imagery, stream of consciousness music, and source manipulations.  It's difficult to describe this cassette because it exists absolutely in its own world.  It's rooted in noise, and it is at times intensely cacophonous, but it is also eerily calm and borderline soothing.  Two massive tracks on each side, inspired by their creator's vivid dreams.  There's certainly a dead-of-night, Lovecraftian sort of psychedelic element at work here as well; at times I am reminded of some of the sounds issued from Matt Valentine's excellent Child Of Microtones imprint.  It'll take you so many listens to figure this one out, a Lynchian mystery void of light and cloaked in bizarre, inexplicable wonderment.
released in a limited edition of 10 hand-numbered copies.  $10 ppd. in the United States, $26 rest of world.

ORDER HERE: www.altarofwasterecords.storenvy.com
Posted by Author at 9:41 AM