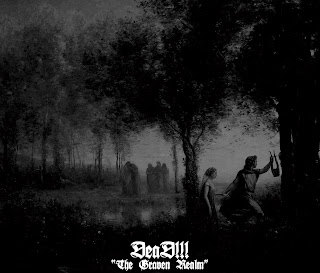 I am extremely honored to be releasing this new double disc collection of bleak HNW from England's DeaD!!!, the crushing and masterful project of James Patrick.  Those active in the scene will recognize James as the label head of the sorely missed Deathsex Electronics imprint, who released a wealth of amazing HNW and noise a few years back (my own Fantome De Sang album "L'Abime" was released through Deathsex Electronics, as part of the Baudelaire compilation.)  DeaD!!! is an astonishingly powerful HNW project; few are able to so accurately explore and depict the truly depressive mindset with as much honesty and existential horror.  The four lengthy pieces here are HNW par excellence: deep, tangled, and horribly dense, bleak as fuck and shot through with anxiety and sorrow.  Absolutely masterful wallmaking; totally essential.
Packaged in an oversized old-school double jewel case, with a beautifully minimal layout by me.  Contains a small informative insert.  This is a really beautiful set; i am struck by how lovely it came out.  Released in a limited edition of 12 hand-numbered copies.  $15 ppd. in the United States, $31 rest of world.

ORDER HERE: www.altarofwasterecords.storenvy.com
Posted by Author at 5:29 AM