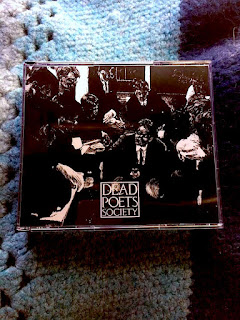 Official reissue of this unofficial drone release i made several years back, after hearing of Robin Williams' suicide.  This has since become one of my favorite records amongst fans of my work, and perhaps the recording most people have asked me to reissue.  So here it is.  The original release blurb, from August 2014:

"I heard of Robin Williams' suicide last night as I was working on another project.  The impact was immediate and I felt a true sadness at the loss of such an original and iconoclastic performer.  As my way of remembering him, I've produced this double album-a rework of the OST to my favorite Robin Williams film (and one of my favorite films overall), Peter Weir's masterful elegy to self-actualization, "Dead Poets Society."  The power of its message, and the enormous presence of Williams as John Keating, simply does not diminish.  I loved this film as a teenager and I still love it as an adult.  It makes me cry every time i watch it, and I am not embarassed to say so.
The music here is fittingly lovely and elegiac.  The final piece on the album is an original 24 minute synthesizer improvisation that I will offer as my tribute to Robin; it is one of the loveliest things I have created and I hope it's worthy.  This is not an official release-rather, it is something made from a place of response and feeling."

This new reissue features a much improved layout.  Packaged in an oversized double CD case.  Released in a limited edition of 6 unnumbered copies.  $15 ppd. in the United States, $31 rest of world.

ORDER HERE: www.altarofwasterecords.storenvy.com
Posted by Author at 7:40 AM