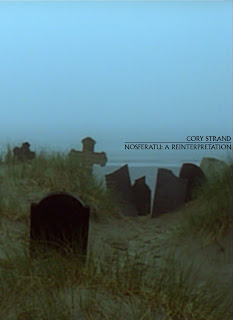 Popol Vuh's eerily ethereal soundtrack to Werner Herzog's equally ethereal reinterpretation of Murnau's Nosferatu is the source for my latest soundtrack excursion, an entirely ambient affair that engulfs the listener in vast stretches of echoey, swirling blissouts and gooey fistfuls of coffin dirt from the dank blankets of the earth.  Herzog's film, while obviously creatively indebted to Murnau's original, became something else entirely, a masterful exercise in atmospherics so gorgeous and supernatural I can think of few other vampire films that come even remotely close to achieving its sense of baroque romance and diseased infatuation.  The grandeur of decaying Europe rots alongside the stench of sloughing flesh, a spectral and skeletal hand reaching out to caress the tender skin of beauty.  The sense of fragility and doom in Herzog's film is near physically palpable, and I have tried to echo that feeling with my work here.  While this set in no way matches the aural richness of Popul Vuh's original, I hope it takes you on a journey to another time, where visions are conjured and love is truly eternal.

Packaged in a DVD case in a limited edition of 5 hand-numbered copies.  $20 ppd. in the United States, $32 rest of world.

ORDER HERE: www.altarofwasterecords.storenvy.com
Posted by Author at 9:57 AM