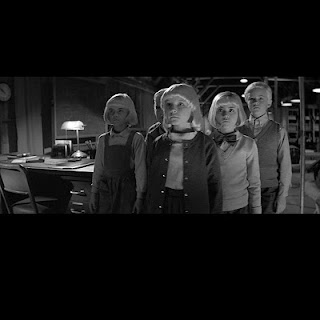 My rework of the soundtrack to John Carpenter's vastly under-appreciated remake of "Village of the Damned" is an exercise in melodic and ridiculously intense wallcraft alongside chillingly banal ambient environments, an attempt to create aurally the emptiness and malice hidden in the blank white eyes of the otherwordly children who lord over the film.  Much like the film, these two discs eschew obvious violence in favor of something more malignant, suggestive, and ultimately distressing.  The imagination creates its own semblance of horror, its own methods of dealing with the unknown, and its own recesses in which to crawl against the assault of insanity.  This record was a blast to make.  Many thanks to Dustin and Occult Supremacy Productions for allowing me the opportunity.  Collage artwork and layout by me.  I have 10 copies available for sale.  $15 ppd. in the United States, $27 rest of world.

ORDER HERE: www.altarofwasterecords.storenvy.com
Posted by Author at 9:47 AM