CROWN OF BONE "THE SERPENT AND THE RAINBOW" CDr (AOW 70) 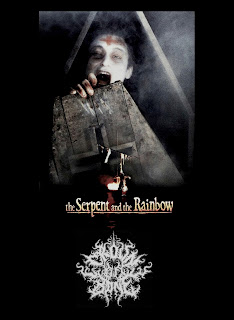 Quite possibly Wes Craven's most frightening film, The Serpent and the Rainbow stands as one of horror's most unique and intellectually intense pieces.  When I first saw it decades ago I recall being unable to appreciate what I had really seen, with the thought the film demanded beyond my young mind at the time.  It did scare the shit out of me, though.  Since then I have come to view this film as a masterpiece, standing alongside Altered States as one of few modern films to truly grasp the twin concepts of transcendence and transformation.  Crown Of Bone's work on this album does a simply incredible job of translating the film's philosophical concerns into sound: the emphasis on possibility, deep and personal inner terror, and the ultimate mastery of forces beyond the human condition and intellectual precipice are all contained here in one engulfing 40 minute onslaught, a tour through the dirt well beyond the clutch of death, a piece that touches fully both drone and HNW but belongs to neither.  This is probably my favorite work from Crown Of Bone, and Altar Of Waste is beyond pleased to release it.
From Dustin: "Buried alive & crawling, scratching my way out from the depths of my shallow grave, 40 minutes of dark, slow churning HNW, keyboards saturated in reverb & percussion drenched in a black mass of distortion, zombie electronics at it's most contaminated."
I couldn't really say it any better.  This record fucking SLAYS.  Packaged in a DVD case in a limited edition of 15 hand-numbered copies.  $10 ppd. in the United States, $18 rest of world.