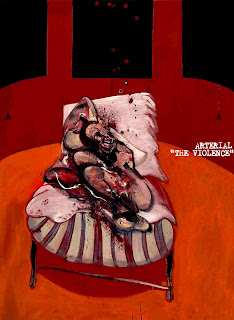 Gorgeous and destructive twin guitar fallout courtesy of Arterial, bridging the gulf between drone and noise with a mesmerizing and brutal intensity.  Parts of this album recall the severe feedback meltdowns of a Mogwai encore eviscerated through a jet engine while others recall the drifting serenity of San Agustin and and Sonic Youth at their most placid.  Together they create an incredible statement of intent for the electric guitar, an anti-expanse for the disassociated mind and a severely disorienting bit of hypnotic and sickly textures united with a knowledge of drone aesthetics that would make the heavens bleed.  There is beauty in disfigurement; there is a spectre of immolation and sacrifice hidden beneath the veneer of lucid calm, restless and haunting.  "The Violence" is a breathless and masterful elucidation of the possibilities of the guitar, a deep excursion into the lovely burning heart of electricity.
Packaged in a DVD case in a limited edition of 30 hand-numbered copies.  $10 ppd. in the United States, $22 rest of world.