CORY STRAND "TO THE WONDER: A REINTERPRETATION" 5CDr (AOW 112) 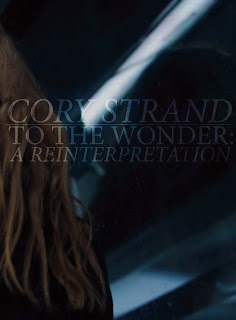 For all its astounding and ethereal beauty, Terrence Malick's "To The Wonder" is, for me, a film about emptiness, a collection of emotions once felt and now dead, a shell of nostalgiah haunting those whose memories the film attempts to assemble.  The magnificent power of the film lies in its ability to to be utterly unknowable and obscure while still being cripplingly relatable, with the wrenching emotions felt by its thinly sketched characters serving as a map to our own shared experiences in a lifelong quest for love and completion.  The sense of ache and yearning that Malick summons so effortlessly is incredibly painful and touching; the majestic glimpses of the natural world serve as reminder of how expansive and complex the palette of human feeling can be, how mystery and wonder can infect the reality of our world and bring it crumbling to the ground.
In working with the soundtrack I have attempted to preserve that sense of expanse, that feeling of being afloat and lost in a world far too gigantic to notice you.  While some of the pieces here are indeed beautiful, blanketing you with warmth and awe, they are also foreboding, indifferent, and callous to the point of being statuesque.  This film made me retreat into myself and truly think about the map of my life, the paths I've created for myself.  I wanted this music to do the same for whomever hears it.  There are no answers here, only a glacially expanding series of inquiries and the gentle, hazy fog of mystery.
Packaged in a DVD case in a limited edition of 5 hand-numbered copies.  $25 ppd. in the United States, $37 rest of world.