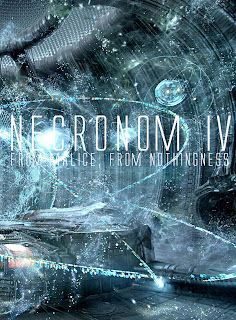 All new double album of epic deep space stagnation drone from Necronom IV, this time in honor of Ridley Scott's much-maligned return to the Alien mythology, the epic and far-reaching Prometheus.  "From Malice, From Nothingness" seeks to map out exactly what the title implies: the genesis and birth of the creature we have come to know as the Alien through the indifferent and perhaps cruel machinations of the mysterious and elusive entities known only as the Engineers.  The drones here are far reaching and cavernous, different from those found on previous Necronom IV efforts but heavily indebted to the same void of ideals and anti-aesthetics, an exploration of the human race's undying hubris and lack of understanding.  Intent and the inherent morality (or possibility) of action provide a framework for extermination, an evolutionary certainty cast as apocalyptic maliciousness indirectly via our supposed mastery over technology.  There is no substitute for nature, nor is there any way to truly fight it.  We cannot win, and we will be eradicated.
Packaged in a DVD case in a limited edition of 5 hand-numbered copies.  $15 ppd. in the United States, $27 rest of world.