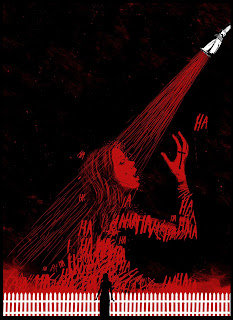 Gorgeous, lush three disc rework of Pino Donaggio's score for Brian De Palma's 1976 horror film Carrie.  Carrie belongs to the school of better Stephen King film adaptations, alongside Kubrick's The Shining, Cronenberg's The Dead Zone, and Carpenter's Christine, and Donaggio's score is equally expert, a barrage of deep orchestral anxiety that perfectly reflects the growing inner turmoil, anger, and desperation of the film's protagonist.
My rework is deeply melodic, shot through with all manner of ghostly melodies and echoes, very much in the Tim Hecker vein of atmospheric sound.  I find it quite beautiful, a fine counterpoint to the violence and humiliation that characterize the film.
Packaged in a DVD case and released in a limited edition of 5 hand-numbered copies.  $20 ppd. in the United States, $36 rest of world.

ORDER HERE: www.altarofwasterecords.storenvy.com
Posted by Author at 7:21 AM