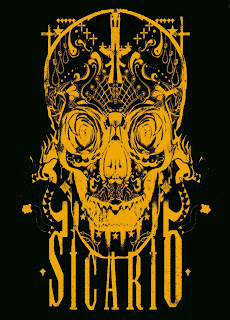 Deep drone/ambient rework of Johann Johannsson's dark, brooding score to what was one of my favorite films of 2015, Denis Villeneuve's Sicario.  Operating in the same morally ambiguous territory as works like No Country For Old Men, The Counselor, and Breaking Bad, Sicario details the true cost of fighting the "war on drugs" at the absolute highest level, revealing the exacting and enervating twin tolls of violence and law.  The film spirals into the same sort of nihilistic despondency as The Counselor, a black hole where right and wrong become interchangeable and blood is the only currency that matters.  It's simply epic filmmaking of the sort rarely attempted anymore.
Johannsson's score is damn near perfect, a reflection of menace and darkness that never lets up in anxiety, tension, or sorrow.  In working with the material i've retained those qualities and transformed them into 18 EP-length pieces of drone and ambience (between 3 and 18 minutes each); this is some seriously deep and hollow work, meant for headphones.  Focused listening reveals detail.
This is the Deluxe Edition, with each of the 18 pieces packaged in separate DVD cases, each with their own artwork utilizing my favorite images from the film (I did the screen grabs for all of them myself; this film features some absolutely astonishing, breathtaking cinematography.)  This edition also includes an HNW "Totality" recording crafted from the film's entire audio track, on a DVD-R.  Released in a limited edition of 5 hand-numbered copies.  $150 ppd. in the United States, $166 rest of world.