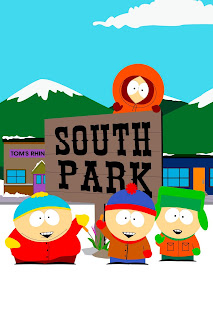 I had a lot of fun doing my 2015 subscription series, "A Year Of Carpenter," so I've decided to do another series for 2016.  This time i'm embarking on an epic exploration of South Park, one of the most caustically funny and intelligent shows currently airing.  I've been a fan of the show since it debuted in 1997, and it's amazing to think of how consistently brilliant it's been since then: its humor has only gotten more extreme and over the top, its attitude toward culture more nihilistic, and its artwork and animation jaw-droppingly gorgeous, rich, and detailed.  I've been wanting to work with the series for a long while, and I'm thrilled to have found a suitable project.
So here's how the subscription series works for 2016: each month, you will receive two (2) CDr's from me, packaged in the usual Altar Of Waste style (DVD cases, interior/exterior artwork).  Each month's CDs will be a twin rework of the audio one of my favorite episodes of South Park: one rework done in harsh noise style (much like my "Totality" recordings from my large film sets) and one done in drone style.  All totaled, at the end of the year, you'll have a set of 24 CDrs, all with consistent packaging and layouts.  They'll look pretty impressive all lined up on a shelf!  Also included is a special bonus item, which will ship out with the final installment of the series.  All of these recordings are 100% exclusive to this series and will never be released in any other format.
There are five subscriptions available: three in the United States and two for rest of world.  Please note that since I am mailing out a package every month, the rest of world cost on this series is, unfortunately, significantly higher.  The cost:

Each set is hand-numbered by me, as usual with AOW releases.
The first two months of the series are completed and ready, so when you order this you'll immediately receive four (4) CDrs: the two January discs and the two February discs.