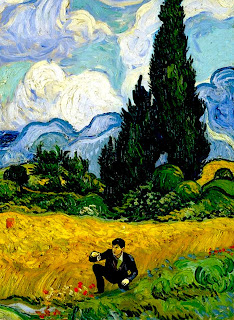 Newest installment in AOW's ongoing series of recordings exploring David Lynch's masterful film Blue Velvet.  Volume 23 in the series comes from Shadowpiercer, the outstanding project of Lynch-obsessive and aficionado Dakota Snaketail.  If you picked up Shadowpiercer's last record for AOW, "Martyrs," then you've got a bit of an idea of what to expect: seriously thick, burbling fuzzed-out noise, struggling to rise to the fore amidst a severely unnerving but eerily beautiful synthesizer drone, an extended tone that threatens to consume the noise but never quite does, creating an uneasy harmony between violence and serenity.  This record captures the atmosphere of Lynch's film perfectly; a masterful and epic composition, and an excellent addition to the series.  Not to be missed!
Packaged in a fold over cover housed in a clear plastic bag, with the disc in a blue sleeve.  Released in a limited edition of 10 hand-numbered copies.  $7 ppd. in the United States, $23 rest of world.