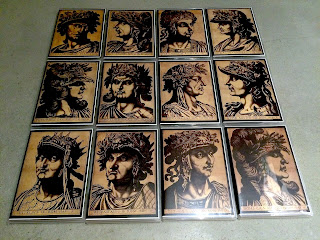 Latest set of literary-themed walls from longtime AOW ally and label favorite The Ebony Tower, this time dedicated to Suetonius' epic biography/history of Rome's twelve Caesars, a slog through years of degradation, tyranny, perversion, and the occasional act of kindness and goodwill.  As usual with Mitchell's work, this is extreme and speaker-shredding wallcraft, meticulously crafted for maximum destruction and void contemplation.  Incredible volume, epic length walls, and hyper-caustic tones make for nearly 14 hours of majestic tonal and textural wipeout, the sort of complete and total obliteration the project has become known for.  It is always a privilege to release Mitchell's work; "The Twelve Caesars" stands as another untouchable notch in a rapidly growing discography of equally untouchable wall recordings.
This is the Deluxe Edition of the set, with each of the twelve discs housed in their own DVD case, each bearing the portrait of one of the twelve Caesars.  It is an absolutely stunning set, one of the most beautiful AOW releases that stands equally alongside the project's "The Brothers Karamazov" set from a few years back.  Very proud of this one!
Released in a limited edition of 5 hand-numbered copies; only 2 are available through AOW (the rest are with Mitchell).  $120 ppd. in the United States, $136 rest of world.