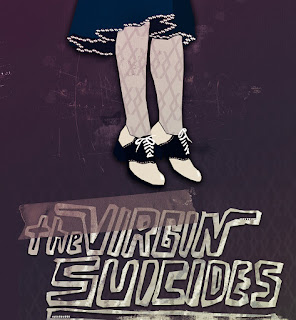 Gargantuan rework of both Air's score and the soundtrack to Sofia Coppola's beautiful hallucinogenic ode to sadness, memories, and temporality, The Virgin Suicides.  I saw this in the theater in 1999 when it was released and it began my unerring love affair with the work of Sofia Coppola; i am hard-pressed to think of a filmmaker who so perfectly summons up the agonies of adolescence, agonies that don't really leave us but instead become the agonies of our adulthoods as well.  The film describes a pain that never leaves, a testament to the fact that time heals nothing and that every hurt we experience is carried with us forever.  Describing what this film means to me is difficult; it has simply been with me since I first saw it, has been a part of me and my emotional makeup since then.  It is important to me.
My rework consists of ambient treatments of both Air's commissioned score and the actual soundtrack of the film.  It is at times hollow, achingly gorgeous, despondent, yearning, empty, suffocating, and beautiful.  Large, oceanic swathes of ambient sound to drown yourself in as you contemplate life's endless sadnesses (and they are endless.)  All in all, it's nearly 25 hours of music spread over 27 discs, with a harsh noise "Totality" recording of the film's entire audio track on DVD-R completing the set.
Each of the 27 discs + the DVD-R are packaged in heavy fold-over covers housed in a clear plastic bags, utilizing my favorites images from, and ephemera associated with, the film.  All of the screengrabs were done by me personally, from a blu-ray transfer of the film.  Also includes an informational insert, again printed on heavy cardstock.  The entire set is housed in a wooden box, which is hand-lettered by me (similar to Naughty's "My King" set from a few months ago).  Released in a limited edition of 3 hand-numbered copies.  $275 ppd. in the United States, $291 rest of world.

ORDER HERE: www.altarofwasterecords.storenvy.com
Posted by Author at 10:38 AM