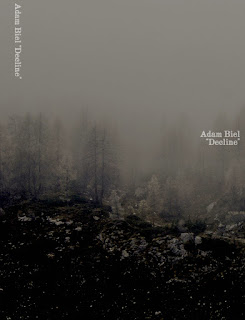 Very pleased to release a second recording from Minneapolis droner Adam Biel.  This new cassette stands in stark contrast to Adam's double CD that i just released awhile back; whereas the double CD was severely dark and ominous drone, this new cassette presents two oppressive and distant-sounding slabs of harrowing ANW crafted as a means to exorcise their creator's anxieties and depressions.  This is some seriously heavy stuff, perfectly bleak and hollowed out ANW.  Adam and i have some collaborative projects in the works, so keep an eye out for those as well.
Indigo blue cassettes, with a smattering of random copies on translucent blue cassettes.  released in a limited edition of 15 hand-numbered copies.  $8 ppd. in the United States, $24 rest of world.
The cassette can be streamed in its entirety here:

ORDER HERE: www.altarofwasterecords.storenvy.com
Posted by Author at 8:58 AM