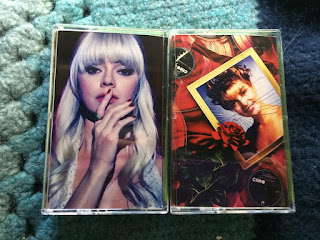 Very pleased to offer up this new split between myself and my friend and fellow Minneapolis droner Adam Biel.  As we've talked back and forth while working on Adam's last release for AOW, we discovered a deeply shared affinity for both Twin Peaks and David Lynch's sound design work; we decided to pursue our mutual interests on a split themed around the new season of Twin Peaks and the Chromatics' performance of "Shadow" from the debut episode.
For this release both Adam and I took apart the song in our own manner and reconstructed it into two massive pieces of Lynchian and Badalamentian dronescapes.  Adam's piece uses tape manipulation to build up a somewhat terrifying hellscape of deep-ocean and oppressive Lynch drone; my piece uses echoes, reverbs, delays, and my own guitar work to craft a slightly more melodic and stagnant drone.  I feel that we truly succeeded in our goal to do justice to Lynch's oppressive soundscapes.  Not to be missed for fans of the show!  Watch for more collaborative Lynch-themed work from me and Adam in the future!
The album can be streamed in its entirety here:

Released in a limited edition of 24 hand-numbered copies, with two different covers.  $8 ppd. in the United States, $24 rest of world.

ORDER HERE: www.altarofwasterecords.storenvy.com
Posted by Author at 6:37 AM