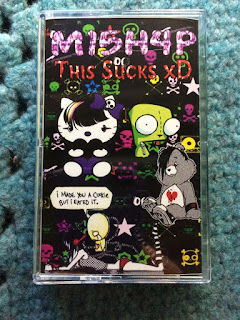 Insane and hyper-aggressive cut-up harsh noise and depressive power electronics from this newer project.  M15H4P's "This Sucks" has already seen a CD release through Big Pharma and a very limited and long gone 8-track release through H8 Track Stereo; AOW is handling the cassette version.  There is so much violence, aggression, and depression going here that it's hard to make sense of.  One of the more blistering and viscerally and obviously intense AOW releases in awhile.
The album can be streamed in its entirety here:

Glorious and very colorful artwork adorn the cassette.  Released in a limited edition of 10 hand-numbered copies.  $8 ppd. in the United States, $24 rest of world.

ORDER HERE: www.altarofwasterecords.storenvy.com
Posted by Author at 9:16 AM