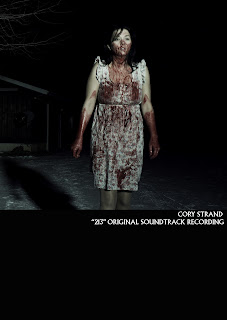 If you really dig Altar Of Waste then you've probably read that I'm close to completing my studies in cinematography and finally attaining a degree.  What you may not know is that I've also scored several of the films I've shot this year (as well as a couple for friends) including my thesis film, "213."  A grindhouse inspired horror film taking its visual cues from the landmark works of John Carpenter (as well as the soundtrack!), "213" follows a young lady as she navigates the surreal terrain of parental disapproval and psychic distress blooming out into caustic violence.  Landing somewhere between "Misery" and "Kill Bill," this film was a joy to make and just as fun to score.
The music here is very different from my work in Dreamless and pretty far removed from any of my noise/ambient projects.  If anything it's a more visceral exploration of my drone interests with an obvious nod to Carpenter, reveling in growing menace and sub-bass terror.  I'm really proud of all the work I did on this film (it's my photography on the cover and inner!) and I hope you enjoy it.  Packaged in a DVD case in a limited edition of 10 hand-numbered copies.  $10 ppd. in the United States, $22 rest of world.

ORDER HERE: www.altarofwasterecords.storenvy.com
Posted by Author at 7:08 AM