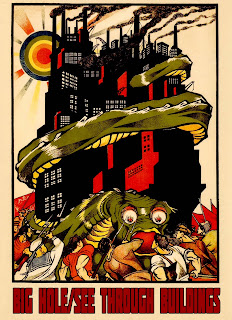 A massive, crushing split release between two of the most interesting HNW projects currently in operation, Big Hole and See Through Buildings.  AOW has worked with both artists prior (both have releases in the "Blue Velvet" series, and Big Hole has a double CD released through AOW, as well as an upcoming split with Dejection in the very near future), and when I was offered the chance to release the CD version of this split, I jumped at it.  Those looking for intensity and volume in their WALL will not be disappointed by either project's contributions here, as the volume levels are near obscene: white-hot, city-leveling destructionism spread across 70 monolithic minutes.  Both projects excel at minute textural changes within their walls, slowly mutating lakes of sound that expand and despond ever further outward, until total blackness is reached.  This is the true harsh that should satisfy even the most jaded HNW ear; no respite and no remorse.  Absolute annihilation.
Packaged in a DVD case and released in a limited edition of 20 hand-numbered copies.  $10 ppd. in the United States, $23 rest of world.

ORDER HERE: www.altarofwasterecords.storenvy.com
Posted by Author at 5:56 AM