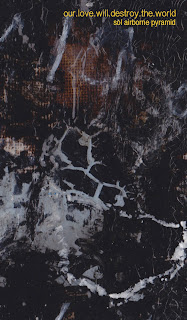 PLEASE NOTE: This is currently being offered as a preorder, to help defray the costs of production.  If all goes well, I expect the cassettes to be in stock and hopefully shipping out late November/early December.

Finally unveiled, the long-awaited triple tape live retrospective from Campbell Kneale's freeform genre-eradicating noise/drone "OHM" unit, Our Love Will Destroy The World.  I have been a fan of Kneale's since forever and being able to put this release together has been nothing less than an utter privilege for me-the emotion and power inherent in Kneale's output (OLWDTW, Birchville Cat Motel, Ming, Black Boned Angel, and a thousand others), along with its unwavering quality and inventiveness, is something most of us working in this genre of "noise" can only dream of achieving.  The fact that Campbell makes it seem so damn effortless fills me with even more bewildered wonderment.
"Sol Airborne Pyramid" is comprised of six live performances, captured in all their beautiful, ragged, overloaded, white-hot glory.  The performances run the gamut of audio extremism, from hushed windy uberdrone to vomitous torrents of distorted sludge corruption to lovely yearning barely-there melodic powerdrone clouds to metallized dreamcrush and back again, creating a tower of sound that reaches to the heavens, storms their gates, and burns them to the fucking ground.  This is OLWDTW unhinged, communing with the ether, reaching for the beyond, dragging outer dimensions into ours and bending them to Kneale's sonic will.  It's a thing a of rare beauty, and I am beyond psyched to release it through AOW.  I could easily end the label with this one and die a happy human being (but i won't-don't worry!)
Packaged as a triple cassette set; nearly three hours of magnificent, expansive sturm und drang.  Artwork by Campbell himself.  Released in a limited edition of 30 hand-numbered copies.  $30 ppd. in the United States, $43 rest of world.