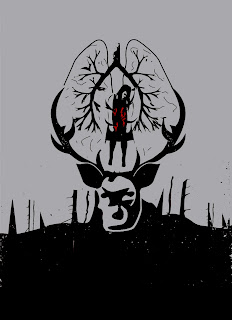 AOW debut for one of HNW's towering figures, the mighty Black Matter Phantasm, here turning in a gargantuan 3-disc work based on NBC's much-beloved artgore drama Hannibal.  The three lengthy compositions here are some absolutely masterful exercises in wallcraft; each wall is a giant, built of deep, engulfing bass tones and thick, sludgy, beautifully crackling sloughs of epic distortion.  This is the kind of deep, enveloping HNW that I truly love, severely overwhelming and hypnotic in the best possible way.
Packaged as a three-disc set, with each disc housed in its own DVD case, with artwork related to and imagery from the show.  Released in a limited edition of 10 hand-numbered copies.  $25 ppd. in the United States, $41 rest of world.

ORDER HERE: www.altarofwasterecords.storenvy.com
Posted by Author at 4:04 AM