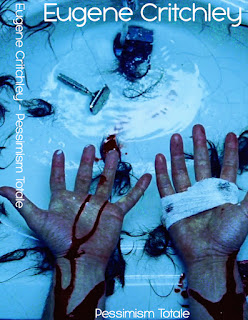 Eugene Critchley's third full length is a massive set of utterly despondent DNW dedicated to illuminating various modes of pessimistic thought and the enervating nature of existence.  Across four lengthy walls of emptiness and bass-drenched sorrow, the suffering inherent in the act of living becomes apparent.  It has been remarked that no true pessimist ever commits suicide; "Pessimism Totale" takes that statement as a challenge and looks to force consideration on that matter, defiantly asking, "Why not commit suicide in the face of endless misery and sorrow?"  Is there a point to life when life is only a collage of hurts and regrets?  Camus' solution, that life should be met with scorn, rings hollow to me, as scorn doesn't much matter to a universe utterly indifferent to human feeling.  This life is nothing but ache, nothing but yearning.  This life is nothing. 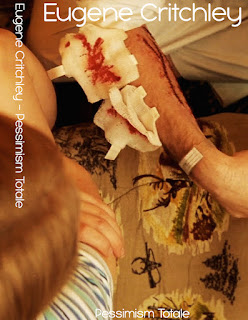 Packaged as a double cassette set, with each tape having its own layout.  This is really one of the loveliest sets i've done, and i'm very proud of the music here as well.  Total depression.  Released in a limited edition of 10 hand-numbered copies.  $20 ppd. in the United States, $36 rest of world.