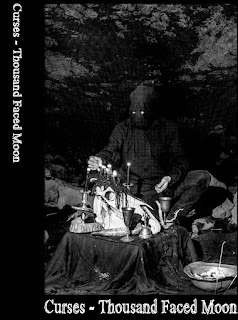 Latest release from California's Curses, a project of A. Visser (Armor Breach, Insect Worship Collective.)  "Thousand Faced Moon"is a deeply eerie and ritualistic exploration of analog sound and traditional/ancient instrumentation.  Definitely music for moon-shrouded nights, the sickly ululations of imbalance and magick.  It's difficult to describe but it's haunting work: thick and distant but forcefully present at the same time, with echoes of Coil and the minimalist synth work of John Carpenter.  Perhaps some sort of dark, anti-kosmiche droned out psychedelia.
Dubbed onto black cassettes in real time direct from the original cassette master, which was sent to me by the artist.  Released in a limited edition of 20 hand-numbered copies.  $10 ppd. in the United States, $26 rest or world.

ORDER HERE: www.altarofwasterecords.storenvy.com
Posted by Author at 3:27 AM