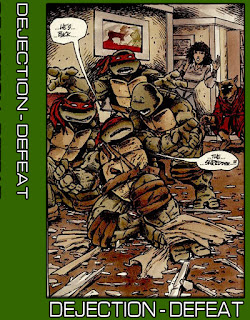 A new recording in Dejection's ongoing "TMNT" series.  This one is very exciting for me as it marks a bit of a collaboration between myself and Gina.  For this album, Gina provided me with some field recordings she made, which I then processed into the two massive, deep droning walls that make up the cassette.  The second piece also features some very minimalist and cinematic synth work from me.  This particular cassette is meant to act as a soundtrack to the brutal issue "What Goes Around Comes Around," wherein the Shredder mysteriously returns and nearly kills Leonardo.  Perfect for Christmastime (devotees of the TMNT will know that this storyline takes place right before Xmas!)
Expect more collaborations between Gina and me in the future!
Dubbed on green cassettes and released in a limited edition of 5 hand-numbered copies.  $10 ppd. in the United States, $26 rest of world.

ORDER HERE: www.altarofwasterecords.storenvy.com
Posted by Author at 9:42 AM