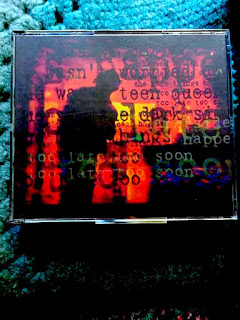 Gorgeous, deeply melancholic and mysterious ambient rework of this mid-90's Neil Young and Crazy Horse record.  Generally regarded as Young's response to Kurt Cobain's 1994 suicide, "Sleeps With Angels" is something of a mess of an album-rushed, sloppy, passionate, imperfect, heavy and brooding while also optimistic.
My rework of the record has astounded even me with its beauty.  This sounds like a massive collection of unused Angelo Badalamenti synthesizer pieces from David Lynch's "Twin Peaks."  I have no real idea how they ended up this way, as my methodology and approach in crafting the rework remains the same as its always been.  Simply beautiful, haunting, dirging ambient music.
Packaged in an oversized quadruple CD case.  Released in a limited edition of 6 unnumbered copies.  $25 ppd. in the United States, $41 rest of world.

ORDER HERE: www.altarofwasterecords.storenvy.com
Posted by Author at 10:30 AM