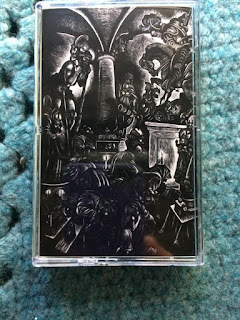 Cassette version of the split between Eugene Critchley and Harsh Noise Movement, recently released on CD through HNM records.  Each project contributes one twenty five piece: a deep and necro drone noise wall of philosophical obliqueness from EC, and a crunchy overdriven mass of dense wallcraft from HNM.  Emptiness and violence.
The split can be streamed in its entirety here:

Released in a limited edition of 10 hand-numbered copies.  $8 ppd. in the United States, $24 rest of world.

ORDER HERE: www.altarofwasterecords.storenvy.com
Posted by Author at 8:59 AM